Synapses and neural circuits in behaviour 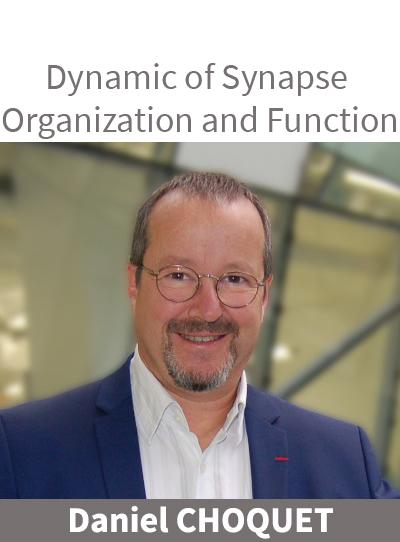 Christophe Mulle is a research director (DRCE) at the CNRS. He's a cellular neurobiologist with expertise in glutamate receptors, electrophysiology of synaptic transmission and neuronal circuits. After being trained in the labs of Jean-Pierre Changeux at the Pasteur Institute and Steve Heinemann (Salk Institute, San Diego), he created a CNRS laboratory in Bordeaux (1995). His research focuses on the mechanisms underlying the plasticity of synaptic properties and neural circuits in the hippocampus, in the context of episodic-like memory encoding. Great efforts are made to implement these questions at an integrated level in the mouse by developing methods for interrogating the connectivity and function of local circuits in vivo in behavioural conditions. These studies address physiological mechanisms as well as synaptic dysfunction in the context of Alzheimer's disease. In parallel, he has engaged into a translational project targeting ectopic KARs aberrantly expressed in the hippocampus, in temporal lobe epilepsy, in close collaboration with Valérie Crépel (Inserm, Marseille). In 2016, he was elected member of the Academia Europeae. In 2014, he has received the Grand Prix Lamonica de Neurologie of the French Academy of Science.

Mario Carta (CRCN-CNRS, University of Bordeaux)is a neurobiologist with expertise in electrophysiology of synaptic transmission and plasticity and in cortical processing in vitro and in vivo. The general aim of his research is to understand how synapses and neuronal circuits function and how they are regulated in various physiological or pathological states. He was trained as a slice electrophysiologist in the Valenzuela lab (University of New Mexico, USA) where he studied how ethanol, neurosteroids and various pharmacological compounds modulate neuronal and synaptic plasticity and circuit functions in the hippocampus and cerebellum. He worked as a post-doc in the laboratory of Christophe Mulle (University of Bordeaux) to tackle molecular and cell biological aspects of synaptic physiology and plasticity. In 2013, he was recruited as a junior researcher at the CNRS. From 2017-2021, he joined the laboratory of James Poulet (MDC, Berlin) where he investigated in vivo cortical circuits during sensory stimulation and behavior, focusing on the role of the mouse insular cortex in thermosensory perception. He learned how to use cutting-edge approaches such as wide field, 2-photon calcium imaging and electrophysiology in anesthetized and awake behaving animals. He returned to Bordeaux in 2022, where he now investigates the synaptic mechanisms underlying gustatory processing in the mouse cortex. 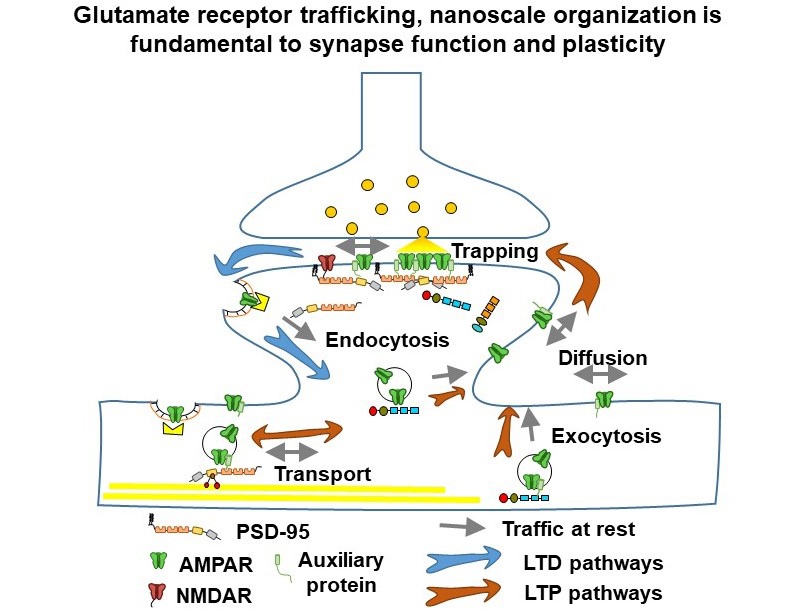 The general aim of the team is to understand how cortical synaptic circuits process and encode sensory and contextual information . We investigate in parallel the CA3 region of the hippocampus and the gustatory cortex (GC). The main strength and originality of our research lies in the systematic back-and-forth interrogation of synapses and circuits ex vivo at a molecular and cellular level, and in vivo in the context of intact neural circuits in behaving mice.

Processing and storage of information depend on multiple mechanisms, from activity-dependent plasticity processes with distinct temporal dynamics to integration of different inputs along the dendritic arborization. We will focus on the mechanisms and integrated consequences of short-term presynaptic plasticity at identified cortical synapses. Presynaptic plasticity occurs within a short- term (seconds to minutes) and long-term (up to hours) time frame at thalamo-cortical and cortico-thalamic synapses, as well as at mossy fiber synapses in CA3. Presynaptic plasticity is postulated to be powerful in controlling synaptic cortical circuits. However direct evidence for a role in controlling sensory and contextual information processing is lacking.

Synaptic alteration is a strong predictor of cognitive decline in Alzheimer’s disease (AD). We propose to explore presynaptic failure as a physiopathological determinant of AD pathology. We will use genetic tools and electrophysiology in mice to better understand the physiological and pathological role of the Amyloid Precursor Protein (APP), a central protein in AD, which is abundantly expressed in presynaptic compartments. In parallel we will implement innovative gene targeting methods applied to human organotypic cortical slices in combination with electrophysiology and high-resolution imaging.

The team has engaged into a translational project targeting aberrantly expressed KARs in temporal lobe epilepsy, in collaboration with Valérie Crépel (Inserm, Marseille). Christophe Mulle is one of the scientific founders of Corlieve Therapeutics (www.corlieve.com), a biotech company which aims at finding new therapies to cure intractable temporal lobe epilepsy. The methodology includes work on acute and organotypic human hippocampal and cortical slices from patients with intractable TLE. 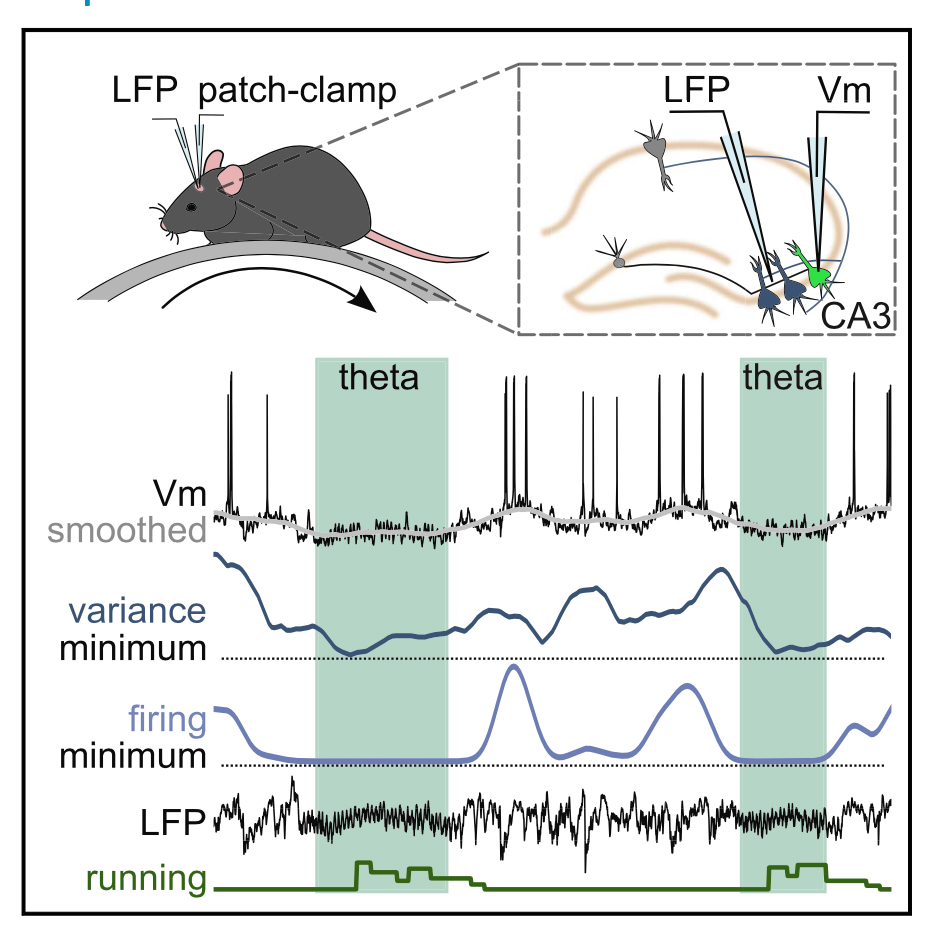 Synaptic loss is the best correlate of cognitive deficits in Alzheimer’s disease (AD). Extensive experimental evidence also indicates alterations of synaptic properties at the early stages of disease progression, before synapse loss and neuronal degeneration. A majority of studies in mouse models of AD have focused on post-synaptic mechanisms, including impairment of long-term plasticity, spine structure and glutamate receptor-mediated transmission. Here we review the literature indicating that the synaptic pathology in AD includes a strong presynaptic component. We describe the evidence indicating presynaptic physiological functions of the major molecular players in AD. These include the amyloid precursor protein (APP) and the two presenilin (PS) paralogs PS1 or PS2, genetically linked to the early-onset form of AD, in addition to tau which accumulates in a pathological form in the AD brain. Three main mechanisms participating in presynaptic functions are highlighted. APP fragments bind to presynaptic receptors (e.g. nAChRs and GABAB receptors), presenilins control Ca2+ homeostasis and Ca2+-sensors, and tau regulates the localization of presynaptic molecules and synaptic vesicles. We then discuss how impairment of these presynaptic physiological functions can explain or forecast the hallmarks of synaptic impairment and associated dysfunction of neuronal circuits in AD. Beyond the physiological roles of the AD-related proteins, studies in AD brains also support preferential presynaptic alteration. This review features presynaptic failure as a strong component of pathological mechanisms in AD.

Wakefulness is comprised of distinct brain states correlated with different behaviors and stages of memory.  It is hypothesized that memory encoding and recall are more prominent during active behaviors, while memory consolidation is more prominent during rest.  The hippocampal region of the brain is involved in all these stages of memory during their respective brain states. For this brain circuit to perform these different computations at different times, it has been hypothesized that the membrane potential of individual neurons must change in a brain state-dependent manner.  We sought to test this hypothesis by recording membrane potential from individual CA3 hippocampal pyramidal cells in awake mice during active and restful behaviors.  When animals are actively moving, the hippocampal local field potential displays a 4-12 Hz oscillation known as theta. We found that, consistent with the hypothesis, CA3 pyramidal cells underwent consistent changes in membrane potential when theta was present in the local field potential.  Specifically, these cells hyperpolarized, decreased firing, and had low membrane potential variance, all of which are consistent with increased inhibition. This sustained, coherent suppression of CA3 pyramidal cells during theta likely changes the circuit dynamics within the hippocampus, contributing to a functional switch that might underlie the ability of the hippocampus to participate in memory encoding during theta.

In Alzheimer's disease (AD), the distribution of the amyloid precursor protein (APP) and its fragments other than amyloid beta, has not been fully characterized. Here, we investigate the distribution of APP and its fragments in human AD brain samples and in mouse models of AD in reference to its proteases, synaptic proteins, and histopathological features characteristic of the AD brain, by combining an extensive set of histological and analytical tools. We report that the prominent somatic distribution of APP observed in control patients remarkably vanishes in human AD patients to the benefit of dense accumulations of extra-somatic APP, which surround dense-core amyloid plaques enriched in APP-Nter. These features are accentuated in patients with familial forms of the disease. Importantly, APP accumulations are enriched in phosphorylated tau and presynaptic proteins whereas they are depleted of post-synaptic proteins suggesting that the extra-somatic accumulations of APP are of presynaptic origin. Ultrastructural analyses unveil that APP concentrates in autophagosomes and in multivesicular bodies together with presynaptic vesicle proteins. Altogether, alteration of APP distribution and its accumulation together with presynaptic proteins around dense-core amyloid plaques is a key histopathological feature in AD, lending support to the notion that presynaptic failure is a strong physiopathological component of AD. 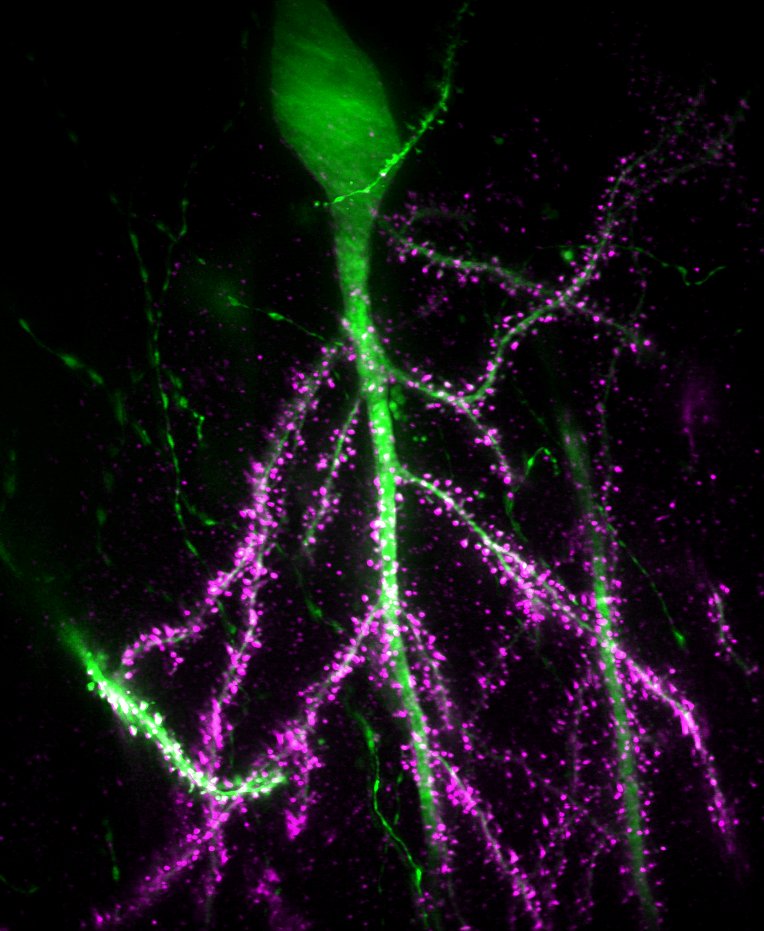 Valérie Crépel (INSERM) at the University of Aix-Marseille and Christophe Mulle (CNRS) at the Interdisciplinary Institute for Neuroscience at the University of Bordeaux have been awarded the 2022 Prize for Innovation of the Académie des Sciences et Belles Lettres de Bordeaux.

Valérie Crépel and Christophe Mulle are very high-level researchers interested in the physiology and pathology of the hippocampus circuits, a region of the brain located in the temporal lobes, which is the seat of memory and learning.

Their highly innovative research focuses on the therapeutic approach to the treatment of temporal lobe epilepsy. This pathology affects 1.3 million people in Europe and the United States, including 800,000 patients who are resistant to known treatments. Christophe Mulle and Valérie Crépel propose gene therapy as an alternative to surgery and its drawbacks. Their therapeutic proposal is developed within Corlieve Therapeutics: it uses microRNA technology, nucleic acids capable of acting at the level of messenger RNA to selectively reduce aberrant effects in the hippocampus of patients.